A few days ago an acquaintance at work, who shared my hobby of restoring old computers, told me he had moved into a smaller apartment and needed to get rid of some stuff and offered to sell me some of the stuff he had not gotten a chance to restore. Seeing a long cold winter ahead, I jumped at the chance and bought a Macintosh Plus, a Macintosh SE and a Commodore 64 from him for $50.

On the night I first had my projects, I booted up the SE. It booted fine from the floppy drive, but the SCSI hard drive is not being recognized. 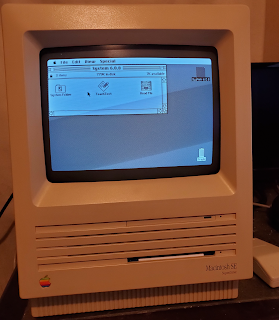 I looked on Ebay and some other places, I can probably replace the drive for $50 to $60. The problem of course is any drive I put in there will likely be 20 or 30 years old and prone to eventual failure. I have a couple of options, like a SCSI2SD adapter or a Floppy EMU, both of those options will probably cost me $100 or so.