It is Memorial Day

Summer is book ended by two holidays, Memorial Day and Labor Day. Every Memorial Day I have high hopes for the summer, but usually by Labor Day I am disappointed. You would think by now I would have learned my lesson. This year, my expectations for summer are very low, not because I learned my lesson, but because COVID-19 is here and it is not going anywhere. Sure there will likely be a slow down the infection rate, but it will not go away and come fall, we will see the second wave and everyone will be surprised.

So I would like to turn my attention to Memorial Day itself, not as the beginning of summer, or a day of BBQ, but rather as a solemn day of remembrance. To be clear, Memorial Day is for soldiers who lost their lives during conflicts. Veterans Day is when we show our gratitude to those who survived those conflicts.

I am a veteran, I have been to war, but more importantly, I have seen the results of war. I am going to state clearly and without regret, that war is never worth the end result. I am not going to tell you the United States should not have entered World War II, we had no choice and it was the right thing to do. However, World War II never should have started in the first place. Adolf Hitler's dream of world domination was not on any level worth the lose of even one life, let alone millions. I say the same thing about the 2nd gulf war, whatever reason George W. Bush had for starting that war, was not worth the end result.

I am certain I will receive criticism for this point of view, after all, isn't the world a better place without Saddam Hussein? The answer is, no the world is not a better place, because nothing has particularly changed. The middle east is still a mess and has turned into nothing more than meat grinder for American troops. Certainly Iraq is a democracy now, but it is one that is being propped up by 25,000 American troops who remain stationed there and the billions of dollars a year we send in aid. If we were to withdraw, the people of that nation would likely vote themselves into another dictatorship in just a few years, so no meaningful change has occurred in the world as a result of that war.

I do believe we should remember these men and women who sacrificed themselves and we should show them the respect they earned, we should not fool ourselves into thinking their sacrifice had meaning, because it did not. War should not be glorified, it should be viewed as a failure of humanity.

Edit:
So think about this when deciding if the Iraq war was necessary or not. If Iraq's primary export was strawberry jelly rather than oil, but everything else was the same, would we have still found it necessary to invade?
at 7:08 AM No comments:

My wife and I never had children. It was not for lack of trying, because we did, but my wife's health issues made carrying a baby to term very difficult to say the least. By the time we were in our 40's, her getting pregnant would have been a danger to her life, but going on birth control was not really an option, again, her health issues. So we made the decision that I would get a vasectomy and that was pretty much the end of it.

For myself, I am sad that we never had children, but I cannot say I regret it. I maintain that I would probably have net been terribly good at being a father. I had no real father figure in my life and the one I did have was himself a terrible father. I know I would have loved our children, and I would have done my best to give them the life they needed. However, I don't think I would have lived up to even my own low expectation. Perhaps this is just an insecurity left over from my own childhood where I watched my own father fail at fatherhood in real time. I am sure I would have done a better job than he did, but i could never shake the feeling, that i still would have been bad at.

What I do regret, is not being able to give Shannon children, I know she wanted them and I know she regrets that we never had any. In spite of that, we have made a good life for ourselves and we have many nieces and nephews who only mildly annoy us.

Shannon, I am sorry we never had children, I think you would have been a wonderful mother, who would have more than made up for my shortcomings as father. I am sure you also would have let me name them Fafhrd and Gray Mouser, or Conan and Elric. I love you, Happy mother day.
at 6:40 AM No comments:

My mother was a single mom raising 5 kids on her own after my dead beat alcoholic father left. I know she had a rough life raising us, but I also know she loved us and made many sacrifices to make sure we were clothed and fed. I love my mother, she is a saint and as far as I am concerned above reproach. Thank you Mom, I appreciate everything you did for me.

My introduction to Tarot

This is page 19 of the comic book Doorway to Nightmare #2, published in 1978 and was my introduction to Tarot Cards. 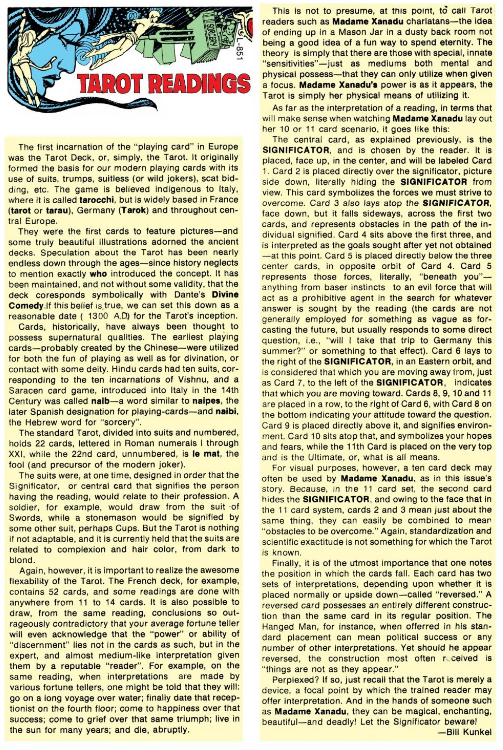 I have been interested in Tarot cards off and on since then. Shortly after reading this, I bought a deck of my own, a Rider-Waite deck if you must know. Although that deck was lost long ago, I have replaced it and I even own a Crowley Thoth Deck now as well.

Recently DC Comic released all five issues of Doorway to Nightmare on Comixology and I purchased them, because I remembered reading and enjoying them as a kid. Reading though them again, I realize these were very adult comics even for a 15 year old. I also realize that comic books introduced me to a lot of things that I still find interesting today. It is very apparent to me now how influential comics were to my development as a person.
at 6:47 PM No comments: