I finally got my C128 up and running. I had to buy another one, which I got cheap because it was known not to boot. After swapping out some parts, I got everything going perfectly., including replacing the missing key. I ran the dead test diagnostics on for a couple of hours and everything, including sound passes.

My next project is a Sinclair 1000, which does not power on at all. I put the power supply on a multi meter and it seems to be working to specification, so the issue is the machine itself. I opened it up and there is no obvious point of failure. I am thinking this may make a decent Raspberry Pi based Cyberdeck, the main challenge being adapting the keyboard to work with the RPi. 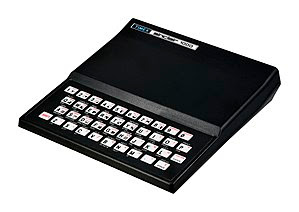 This Retro Battle Station is now fully operational. I got a cassette player to save and load programs from and hooked up the speaker. I am now ready to Hack the Gibson. I discovered there is also a website where you can run Apple //e games from the website. Basically you plug an audio cable into your PC speaker output and connect the other end to the data input on your //e, type "LOAD" and click on the play button of the game you want and it transfers the program just as if it were loading off a cassette tape. It is actually brilliant in it simplicity. 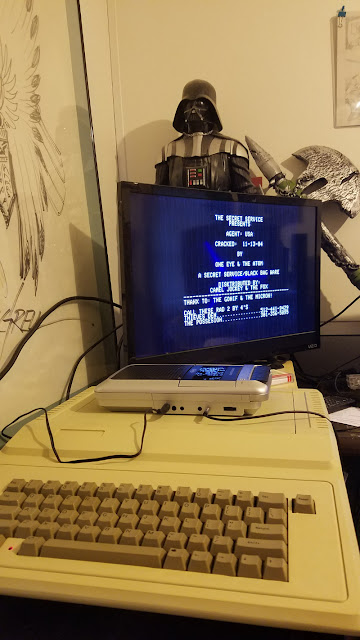 I got the Apple IIe up and running again. I pulled apart the 2 power supplies I had and built a single hopefully fully operational one. I did have to scrounge up some new capacitors, but that was not too hard. Floppy drives for these things are way too expensive, I think instead I am going to get a cassette recorder and use it to store what little I need to store. 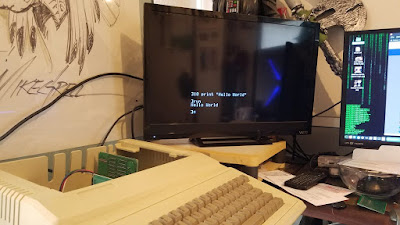 I mentioned the other day that people back in the 80's used their 8 bit machines to do many of the same tasks we do today. In retrospect that seems like a dumb statement, I mean sure they could sort of do these things, but realistically, it is much easier to do them today with modern machines. What got me to thinking about this was a forum post were someone was talking about possibly surfing the web using a C64. I started thinking about it and came to the conclusion that yes it could probably be done, but it is hardly practical and probably not worthwhile, the resolution just is not there. I think realistically, sticking with telnet BBS's is probably the best bet.

So low and behold, a user on the Lemon64 forums came up with the idea of building his own markup language, client browser and server software. At this point his client only runs on the C128, but he has a port for the C64 forthcoming. His markup language only has 9 tags for building pages, but really for an 8bit system I think that is sufficient. The big issue at this point is you cannot link between sites as of yet, but as he said, he has only been working on this for about a week. Loaded the browser software in WinVice and had no trouble connecting to his demo site. However, when I tried to setup his server software, I could not for the life of me get it so my client render the page. It turned out the problem was with carriage returns and line feeds. He developed his software under Windows, which really only uses carriage returns, well Linux requires both a carriage returns and a line feed. This is a pretty well known issue in general and it was easy to fix, Linux has a tool that fixes the broken Windows text files. Once that was done my client rendered the default page just fine. I have since been trying to design my own page, but so far I have had a lot of problems with formatting and if I change the default page even a little, it seems to screw things up.

So, from a purely technical stand point this is typical alpha software, it barely works but there is a lot of hope for the future. I like the theory of this idea, but I am not sure the reality is going to be terribly useful. One of the responses on this in the Lemon64 forum was they hoped eventually he could check his email, read and post to Lemon64 and browse CSDb. I think this is unrealistic, the problem is, we already have ways of doing those things that don't require me to wait 3 minutes for my browser to startup and I am not really interested in returning to the days of slow motion page rendering. On top of that, content is king, if people do not step up and create servers with interesting content, this will die pretty quickly. I signed up for some BBS's and over a couple of weeks signed in to them everyday, I posted to the boards and generally tried to contribute, what I found was often, I was the last person to log in and the only new stuff being posted was by me. These BBS's are ghost towns where most users log in twice year. I see this going the same direction if someone does not come up with an interesting idea.
at 8:02 AM No comments:

Well that did not last long. I heard a pop behind me and when I turned around my Apple IIe was smoking. I walked over and unplugged it, now my IIe is dead and my den smells like someone lit 50 matches. Sadly, like most ebay buys, the power supply has no warranty. Maybe between the two I have I can make one working PSU.
at 7:01 PM No comments:

Got the replacement power supply for the Apple IIe and the system booted to Applesoft. I did try to boot it without the keyboard connected, but it gave me a RAM 100 errror, so I hooked up the keyboard and it fires right up, I then hit CRTL-Reset and it dropped into Applesoft. 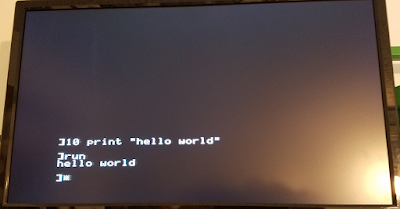 So YAY! Seems my luck has improved a bit after the C128 fiasco. I guess now I will have to put it back together and start thinking about whether or not I can afford a floppy drive for it.
at 4:35 PM No comments:

Okay so, apparently I am not as good at reseating socketed chips as I thought. When I pulled the chips again, I found I had bent a pin on the SID chip. Once I straightened it out and put it back in, the C128 started booting normally again. 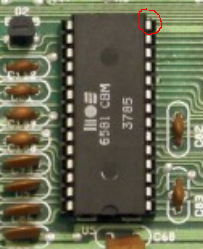 I acquired a deadtest cart and it is on its 2nd run, the first time I let it run 10 times, with no errors except I am not hearing the 3 tones for the sound test. I wanted to make sure the cart was good, so I out it in my C64 and it ran 10 cycles just fine, and I heard the tones. It is now on its 2nd run with the same problem. I am assuming this means I screwed up my SID chip.
at 5:11 PM No comments:

I opened my C128 last night and reseated all the socketed chips, I though this might help with the odd lockups and the machine code screen dumps I have been getting. Unfortunately, this made things worse, I am now getting a black screen when I turn on the power, even C64 mode does not work. Additionally, when I press the reset button it does reboot, but I get an odd tone for several seconds. Looking at the troubleshooting guides, there are a lot of things that cause this and at this point I do not know if I screwed something up, or I simply accelerated the failure of an already ailing computer. The next step is to open it up again and reseat the socketed chips again, and make sure I did not do something wrong.
at 5:01 AM No comments:

I have shown the case of the Apple IIe, but I have not shown the inside yet. What surprises me most about this motherboard is its simplicity. I mean sure, this system was built in 1982 according to the date on the board and it is pretty anemic by today's standards. But think about it, people use to do all the things we do today on these machines. They played games, created documents in word processors and spreadsheets, they got on BBS's, read online content and exchanged emails. They did all this on a 1 Mhz CPU and 64K of memory. Think about that for a little while. 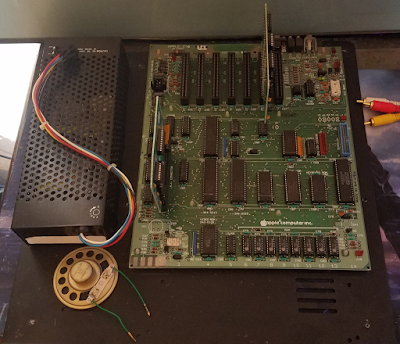