I picked up three Optiplex 3050 mini computers for $20 each. They came sight unseen, untested and without power supplies. I would have offered more, had the systems come with power supplies and I could have tested them. I purchased a single power supply so I could test the three system. All three are working and took a Debian install, so now I need to buy two more power supplies, which only cost about $17 each, so I am still under $40 for each of them. 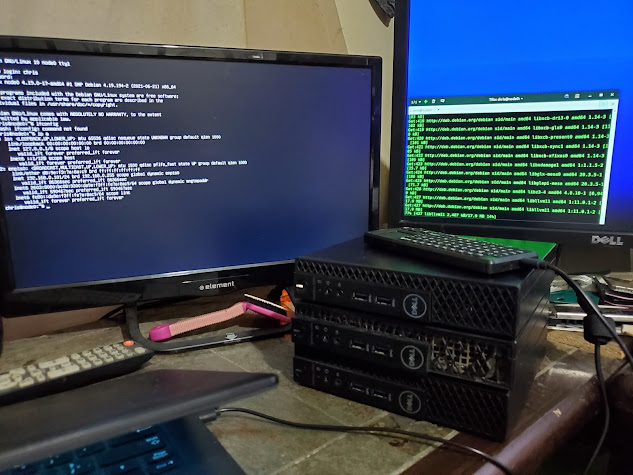 Where I am now, is what to do with them. They each have i3 processors, 4GB of RAM and a 500 GB hard drive (not SSD's) and they are less than 4 years old. I am tempted to build a Beowulf cluster, doing this would allow me to do some interesting projects, like find out just how long it would take to break a Windows password or perhaps experiment with machine learning and unleash a Twitter Chatbot on the world just for the LOLs.

Two of them would also make pretty good media servers, as you can see, the middle one in the stack is pretty beat up and probably will not clean up well, having that sit next to a TV would just be unsightly. I am also not sure if the Intel graphic would be up to 4K video playback and there is not much I can do about that.

There are other options for using these machines, but really, I think the Beowulf cluster is the most interesting of ideas. I have a laptop that I use for testing different operating systems and such, I think I will use it as the master node in the cluster. This would remove the need for any keyboard, mice or monitors, since the three nodes would be headless and the laptop would be used to manage the cluster. The laptop also has both an Ethernet connector and wireless, so the Ethernet connector can be used to communicate with the nodes, while still having access the rest of my network and the internet via wireless. I can also setup network sharing on the laptop to provide access to the nodes for updates and such.

At the moment, I am waiting on the 2 power supplies and a network switch. I expect to have those by Wednesday and after that I will begin setting up Skynet.