The least popular Dell PC ever

My latest retro computer acquisition is a Dell Web-PC. This models sales were abysmal, Dell only sold a few thousand for the 9 months it was available. Really, this was too bad because it was ahead of its time for 1999. It was the first legacy free PC on the market. By legacy free, I mean it has no floppy drive, no serial port, no printer port, no PS2 mouse and keyboard ports. The system sported three USB ports for peripherals, integrated modem, audio and video. The CPU is a Celeron running a 466Mhz, 64 MB of RAM and a whooping 5GB hard drive. The most interesting thing about this machine was the coffee maker design of the case. 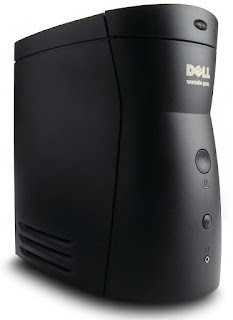 When I received this one, I had three major issues. First I noticed the power supply was not screwed down and was loose in the case. Some one had opened it for one reason or another and when they put it back together, they did not screw in the power supply properly. This was an easy 10 minute fix for me to open it and screw everything in proper. When I booted it up, the first thing it told me was the memory size had changed, now I knew why they opened it up.

The second issue was it would not boot into Windows 98, it would get to a screen where it was identifying my monitor and it would freeze. I had no problem getting into Safe Mode, so I cleaned things up as best I could, cleared out the Startup folder, uninstalled the old ass version of McAfee and cleaned up the registry. It still would not boot into Windows 98. So I booted to command prompt only, went into C:\Windows\Options\Cabs  and ran setup.exe. I know some of you are cringing right now, a dirty reinstall of Windows 98 was very much a no-no back in the day. In my defense, this was a last ditch effort to save this install, if it did not work I was going to have to do a clean install anyway, so I went for it. Fortunately it worked for me and I was able to get into Windows 98. I then went ahead and did some maintenance on it, I ran disk cleanup, made a complete run of chkdsk and defraged the drive. There is nothing more fascinating than watching Windows 98 defrag 1.5 GB of data on a 23 year hard drive.

The final problem was once inside Windows I found the CDROM did not work. I tried re-seating the cables to no avail. This does not really bother me much, I suspect I can probably get a replacement easily enough, but at the moment I have no particular need for it.

While this is not the fault of the machine itself, but rather the time frame in which it was designed, it does not have any network ports, nor does it have any PCI ports to add one. I can't say I really need to get this machine on the internet and in fact it would probably be a bad idea. However if I ever beed to, I expect I can find an USB Ethernet dongle that will do the job, but for now, I will leave it be.

I realized I had an old TrendNet wireless USB dongle that had Windows 98 support. I used my USB floppy to install the Windows 98 Mass Storage drivers, which allows me to plug in USB drives. I then used a 32 MB USB drive to install the TrendNet drivers. Worked perfectly, the system is now online, although I still don't think having a Windows 98 machine on the internet is a good idea.