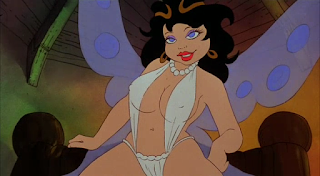 Ralph Bakshi's Wizards is one of my favorite movies. It is a classic heroes journey tale told by a 1970's stoner. The movies detractors complain that the animation is awful, the story is uneven, silly characters and it is terribly dated. I agree with only one of these things, the movie did not age well at all. However, I do not think this is a bad thing. Many movies made decades ago are now dated, but still considered classics. The animation of this movies was and is actually very good, it has bright colors and made good use of the tertiary color schemes. The retroscoping was definitely a low point, but really only because it was so different from the rest of the movie.

The story on its surface was simply about good versus evil, two brothers hashing out their differences. However under the surface, we see a world that has been devastated by war, pollution and excesses of greed. A world which is once again on the brink of destruction. While much of the movie is in fact a bit goofy, but there are many iconic scenes that pointed to deeper issues. For instance the scene where Blackwolfs army goes to the church and asks the priests to take the prisoners of war, the priests say "Patience. We must first observe sundown and pray." and then promptly danced and prayed for hours before the soldiers finally killed the prisoners. This draws attention to how often religion does nothing in the face adversity, preferring instead to pray and let god sort it out, rather than taking action. The classic "They killed Fritz" scene is another good example, it is a satirical look at soldiers dying from friendly fire. The whole movie is a commentary on the dangers of war and unrestrained industrialization.

While I am talking about iconic things, many of the characters are very iconic. Avatar, the wise cracking, cigar smoking hero. Weehawk, the brave and fierce elven warrior. Blackwolf, the most evil man in the world. Necron 99/Peace, the assassin turned good guy. Then of course there was Elinore, I am pretty sure Elinore played a big part in my life during puberty. I can remember at least one conversation at the time about how sexy Princess Leia was and my comment was, "Yeah, I'd do Princess Leia, but I would be thinking about Elinore.".

In spite of what anyone says Wizards is a great movie, every time I watch it, I see something new and laugh at gags I have seen a dozen times, because they are still funny.
at 4:36 PM No comments:

Some days I am embarrassed for humanity

Things you see in museums

I came across this on FaceBook today. If I ever play a Bard in D&D, this is totally going to be my instrument. 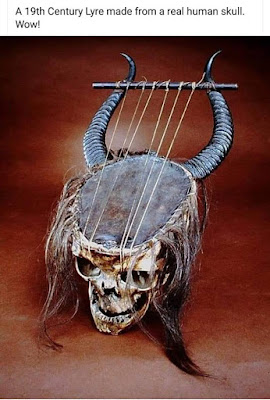 Let us bow our heads in a moment of silence for Anorak, my War Domain Cleric 1/Wizard 6. He was lost to a bad draw on a Deck of Many Things in tonights game. He drew Donjon and is now imprisoned somewhere unknown. He was kind of a dick, so he will be missed by no one.

I enjoyed playing Anorak, he was a proof of concept character I had been working on to resolve the "Wizard AC is supposed to suck" problem. The proof of concept worked really well and for awhile there, he had the best AC in the party. As he developed as a character, he became the party strategist who successfully turned the tide of three important battles. In spite of that I was kind of uncomfortable playing him, because he had also developed into kind of a jerk. I had not intended for him to be as such, but went in that direction anyway. Don't get me wrong, I did not hate playing him, in fact just the opposite. Yes, he was uncomfortable to play him, but he was also a deeply interesting character to play.

Sometimes characters develop in ways you really never intended, sometimes this is fun , and sometimes its uncomfortable. It could easily be argued that I had total control over the character and could have made him not a jerk. I don't agree with that entirely, a good roleplayer allows events to change the character, the character should react and respond as events unfold. Like people in real life, characters in D&D should respond to those changes. In real life, when bad things happen to us, we either rise up to the occasion or we sink into the swamp. I have had many characters rise up to the occasion, in Anorak's case, he was sinking into the swamp, not unlike a soldier with untreated PTDS. He was doing increasingly dangerous things, and at one point he coldly unloaded a Wand of Fireballs into an enemy with one of his team members standing right next to her, with no regard for the other characters life or safety, yeah he was being a dick and this ultimately lead to his removal from the game as karma took its toll.

While I am sure the other players are not sad to see Anorak go, I kind of am. Not only was he an interesting experiment in game mechanics, but he was an interesting experiment in how being a professional dungeon crawler might adversely affect someones emotional well being. Not all adventurers are cut out for the work, not all characters are meant to be the hero of the story, even if at the beginning, it looks like he is.
at 8:04 AM No comments: 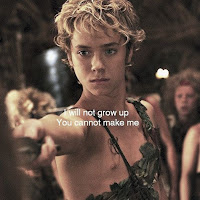 Wendy reminded me last night that I want to be a Lost Boy. No!, not the ones from the 1980's vampire movie, I mean the ones from Peter Pan.

I want to never grow up. I don't want to have a bedtime, I want to live in a tree house, I want get into sword fights,  and I want to fly.
at 7:28 AM No comments: 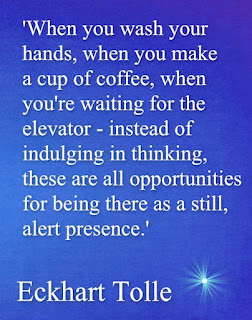 I had to read this three times before I understood what it really meant. It is kind of confusing. Essentially it is a zen like saying about how we should try to live our lives more fully. Instead of letting our minds worry about everything all the time, we should take those moments where we don't need to be thinking, we don't need to be worrying and instead, find peace within ourselves. While you are waiting for the elevator, don't think about the email your boss sent you yesterday, just relax, clear your mind and just BE!

A friend sent this too me yesterday, she is trying to rewire my brain I think, maybe not be quit so intense. Thinking is what I do, it is what I do at work and its what I do for fun, heck sometimes I am thinking about 2 or 3 different things at the same time. This will be my struggle for the year I think, I am use to living a life of doing, maybe it is time for me to slow down and think less, live less inside my own brain.
at 6:45 PM No comments:

Internet quote of the day

JC DENTON: I don't see anything amusing about spying on people.

MORPHEUS : Human beings feel pleasure when they are watched. I have recorded their smiles as I tell them who they are.

MORPHEUS: The need to be observed and understood was once satisfied by God. Now we can implement the same functionality with data-mining algorithms.

MORPHEUS: God and the gods were apparitions of observation, judgment, and punishment. Other sentiments toward them were secondary.

JC DENTON: No one will ever worship a software entity peering at them through a camera.

MORPHEUS: The individual desires judgment. Without that desire, the cohesion of groups is impossible, and so is civilization. The human being created civilization not because of a willingness but because of a need to be assimilated into higher orders of structure and meaning. God was a dream of good government. You will soon have your God, and you will make it with your own hands. I was made to assist you. I am a prototype of a much larger system.
at 3:48 PM No comments: