So at lunch today, I setup both the Mac Plus and the Mac SE on my desk in the bedroom, this is where I plan to work on them, away from cat supervision.

The Plus does power on, but as I was unpacking boxes, I found the floppy for it had been removed, the previous owner said it was bad, so this does not bother me much, although I may put it back in just test it myself. I also found an Apple 300 external CDROM, I plugged it into the Mac SE, it powers on and takes discs, but the system did not see it. All I have is a startup disk rather than the complete operating system. so it may mean I just need drivers for it. 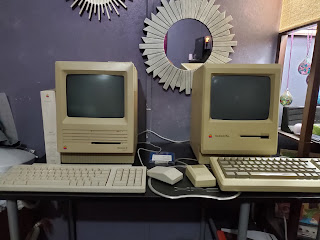 I also found an unopened copy of HyperCard, this was an early attempt at a way to collect and present data, sort of a precursor the the World Wide Web, minus the network support. I do not know if I have the heart to actually open it and try to use it.