Recently I wrapped up my latest D&D campaign, it lasted over 2 years and I was planning for a year before that. The PC's all made 20th level, which is a record for us. The story itself actually started 35 or 36 years ago when I decided I wanted to merge some game worlds together, mine, Bruce's and Stomper's, so characters from all those places could play in my campaigns. That campaign ended with on of the characters blowing the horn of destiny which merged all three worlds into a new Caldoom. This latest campaign ended with another PC blowing the horn again, this time splitting those worlds out separately again. Below is my original map, that I drew in 1979 or 1980 side by side with a new updated map I made a couple of weeks ago. I am thinking our next campaign will begin with the 5E update of Into the Borderlands, which was the first module we played back in the day, a good kick off I think. 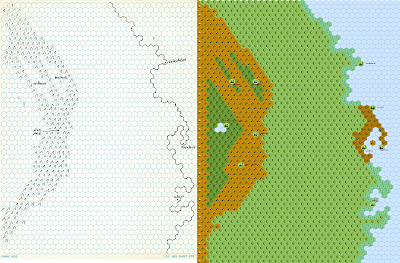