To the Internet with Love 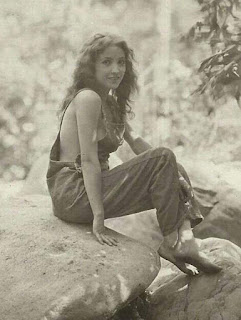 Sometimes when I am surfing the internet, I come a crossed a picture that makes me stop and think for awhile. This is one such picture, when I saw it, I thought it was a picture of a 60's hippie chic, after all, she is obviously naked under those coveralls. As I thought about it though, I came to the conclusion that perhaps she was a country girl, with her dirty feet and unkempt hair. Of course my mind did not stop there, she is obviously posed and seems comfortable in front of a camera, it is also possible she is a model.

I finally broke down and did a reverse image search and found this woman is Bessie Love, a silent screen era actress, the picture was taken in 1923. She was in fact all of the things I considered, she was born a Texas country girl, who was by all accounts a woman a head of her time and an academy award nominated actress. This picture is endearing because of its earthy innocents and time transcending beauty.
at 7:46 PM