Medusa, the other side of the story 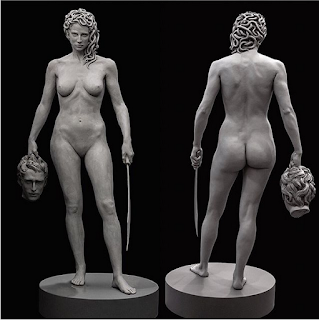 I saw a picture of this statue a few years ago, and an article about it popped up on Facebook today. The statue is of the Medusa with Perseus's head in her hand. I think this is an interesting juxtaposition of the story. In the original Peresus Statue he is holding the Medusa's head up high as he himself faces the sky in victory. In the story he is the hero who has slain an evil and vile creature. However, if you read the Medusa'a story, she is actually the victim. First she is raped by Poseidon in a temple of Athena. The Athena punishes her by transforming her into a gorgon, I suspect this was the first recorded incident of victim blaming. Medusa was then sent to live in exile because everyone who gazed upon her turned to stone. Finally Perseus was sent to kill her and was given several magic items to assist him. None of these events were her fault, but rather the gods playing with mortal lives like they were toys.

With this statue, it shows the Medusa as the victor of the fight, instead of holding Perseus's head high and proclaiming victory, it is at her side and her eyes are cast down because she has won nothing, the gods hate her even more now and she was forced to kill an innocent man who is also nothing more than pawn of the gods, but she did what she had to to survive another day.
at 1:37 PM