Recently I bought a Raspberry Pi 400. This is a neat little device, basically it is a Raspberry Pi 4 (RPi) built into a nice slim white keyboard. Like the RPi, it has GPIO headers for attaching interesting devices like sensors, servos or small LCD panels. It is powered off a USB-C connector, it has 2 Mini HDMI ports so you can run 2 monitors on it and has USB3 ports. The most important thing about it is the 4 core ARM processor that runs at 1.8Ghz and it has 4 GB of memory, which mean it is fast enough to function as a proper desktop computer. 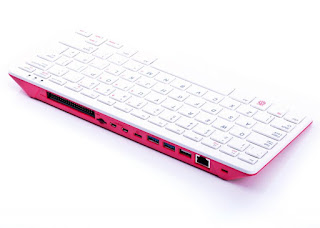 Now, would I use this as my main computer? Probably not, but as a backup machine, why not. If I were buying a computer for a kid, this would definitely top my list, coming in at $70 for just the system itself. A more complete kit with power supply, Mini HDMI cable, mouse and an SD card preinstalled with an OS is about $100. It does all the basic things a computer needs to do, surf the web, check email, basic document creation, plays MP3's and videos with very little trouble.

There are a couple of downsides as you would expect. For one the keyboard is a bit cramped, I typed this post on it, and I found it to be just a little uncomfortable. It boots of an SD card, which are notoriously slow for disk access, so if you are reading and writing large files, the system will pause for a bit. i found attaching a USB3 Hard rive to it fixes that problem pretty well. Finally, this is not a problem for me, but many other people will, it does not officially run Windows. Some clever hackers have gotten Windows installed on it, but there are missing drivers, and will be missing features like WiFi and Bluetooth support. For me this was not a big deal, I am a Linux guy, so this did not bother me even a little.

Overall, not bad, the RPi 4 was certainly the best Raspberry Pi to hit the market and this does it one better by making it an integrated easy to use computer.