Over the last week or so, I have been experimenting with the Colour Maximite. I have discovered two things as I have been moving along. First, the people at the Backshed forum, where most of the Maximite community hangs out, is not terrible helpful. They are not mean or anything like that, they are just somewhat insular, and are not helpful to newcomers. The second thing I found is there does not seem to be much in the way of useful tutorials. Certainly there are some guides and such, but mostly they are a hodge podge of things mixed together, making it difficult to know where to begin or even to find what you are looking for.

With this in mind, I thought I would create two, maybe three tutorials on what I learned in the last week, starting with how to use the thing with a breadboard, hooking up an LED and making it blink. From there I will work in an LCD panel, and along the way we will draw some circles and play some sounds, maybe even some music. What I am not going to do is go over setting the Maximite up or using the editor, there are plenty of places you can go to learn this. I am also not going to go too deeply into programming in Basic. My goal here is to get you started doing some simple things, so you can get an understanding of how this works at its most basic level.

The first thing we need to do is wire the LED to the Maximite. Plug one jumper wire into Pin 12 on the back of the Maximite, in my picture, I use a yellow wire. Next plug another wire into Ground (GND) on the back of the Maximite, I used a red wire. Once that is done, we need to plug those wires into the breadboard. In most breadboards, the holes in each horizontal column are a connected set of five, the holes going vertically, are not connected. You will notice a gap in the middle of the board  separates the set of five on top and the set of 5 on the bottom, these sets are also not connected. So plug Pin 12 wire into the top left corner hole, then take the resister and plug one side into the one of the holes connected to Pin 12, and plug the other side into top hole just across the gap. Next, plug in the LED so the long wire is in the same horizontal column as the resister. This connects the LED to the resister, which is needed to reduce the voltage, then on to Pin 12. The short wire on the LED should then plug into a hole vertically next to the long wire, then plug GND wire into one of the other holes in the same set of 5 holes as the LED short wire. Your wiring should look similar to mine. 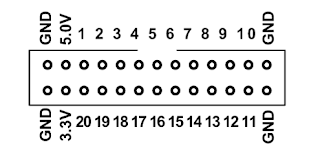 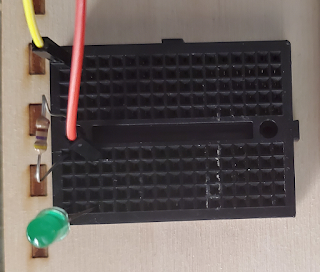 Now we start programming. Start up your Maximite and type edit. We need to start by telling the machine which Pin we are going to use and what we expect to do with it. In this case we want to use Pin 12 and we want to tell it to turn off and on. "SetPin 12,DOUT" is how we do this, when using SetPin the first option is the Pin number, the second is the how we want to configure the Pin. In this case we want Digital Output, here are the other options;

After that we simply loop the main commands Pin(12) and Pause, until Ctrl-c is pressed. Pin(12)=1 turns the LCD on and Pin(12)=0 turns it off. The Pause 500 command simply tells the program to wait for half a second, then continue, by increasing or decreasing this number you can speed up or slow down the blinking.

And that is pretty much it for my first tutorial. If it does not work, make sure you have wired it up correctly, specifically that the long wire on the LED is plugged in with the resistor and Pin 12, then check to make sure you typed in the program properly. Also, do not forget to save your program, we will be expanding it in the next tutorial.