When I was a kid, my grandparents saved weird things, plastic bags bread came in, the card board center of toilet paper rolls, scrapes of cloth, to name just a few odds and ends. At the time, I had no idea why they did this, and when I would ask, they would simply reply, you never know when you might need them. This made some vague sort of sense to me, but not really. When I got older, I noticed that other peoples grandparents did the same thing, and learned a little bit about history, I realized they did this because they had grown up during the Great Depression and during that time, you did not throw anything out, absolutely everything had a secondary use.

I began thinking about this, because several weeks ago when this whole COVID-19 thing came into the broader public awareness, and people began hoarding toilet paper and it was getting difficult to get, while I had plenty to last me for several weeks, I felt that I needed a backup plan. I was hoping that once everyone had filled up their spare bedroom with boxes and boxes of toilet paper, they would realize they were being stupid, but I was not going to count on that. I went on Amazon and saw that basically all toilet paper would take 4-6 weeks to be delivered, I ordered an 18 roll bundle and figured it was going to be more like 6-8 weeks, which I ended up being right about. At the time, I was thinking, that was going to be cutting it close and that where I started thinking about plan B.

A few days later, I had just been to the drive through at McDonalds and when I opened by bag, there were napkins, I pulled them out and went to toss them in the backseat, where I had accumulated a small pile. I keep them, because you never know when you will need them, wait this sounds familiar and my plan B solidified in my brain. I would save all the napkins I could get by hook or by crook.

Here we are now, 6 weeks later, my toilet paper from Amazon has arrived and here is my accumulation of napkins. 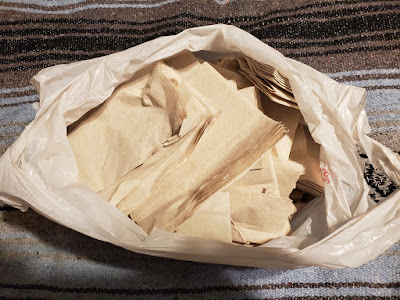 I think my grandmother would be proud of me.