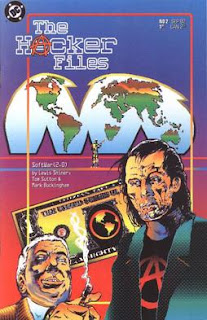 From August 1992 to July 1993 DC Comics published a comic book entitled The Hacker Files. The story was about a computer hacker named Jack Marshall who exists in the DC Universe. The 12 issue mini series contained 4 story arcs touching on different real world historical events of the time; the spread of computer virus's, FBI cracking down on computer crime, the Tiananmen Square protests and the rise of artificial intelligence. The series was not well received at the time and pretty much dropped off virtually everyone's radar even before the end of the series. The series has never been reprinted or even discussed much.

The reason I am bringing up this little known comic book from the early 90's, is DC is about to publish a new graphic novel The Oracle Code, a book about Barbra Gordon's (Batgirl) time as the computer hacker Oracle. For those of you not in the know, In the aftermath of Batman: The Killing Joke, Barbra Gordon was left paralyzed from the waist down when she was shot by the Joker. She would later regain her mobility, but while she was in a wheelchair, she acted as an intelligence collector and an operational overwatch for many heroes and was the leader of The Birds of Prey. Barbra Gordon was one of the hackers picked up by the FBI when they began cracking down on cybercrime, and appeared in The Hacker Files briefly and the two have encountered each other.

I realize The Oracle Code has already been written and the art is probably all but done at this point, however I think this would have been a great opportunity to revisit Jack Marshall in the modern post New 52 DC Universe. While he failed a lead in his own book, I think Jack would make a great backup character or perhaps as a replacement for Barbra as Oracle, though I have to admit, I am not terribly warm to that idea. I think he would be better suited as one of those normal people that superheroes goto to get things done. He is a middle aged, balding, overly serious and grumpy man, a great foil to the young, pretty and energetic Batgirl. I would love to see a scene where no one is taking him seriously, until he starts using everyone's first names, showing that none of their secret identities is safe from his skill.
at 6:15 PM