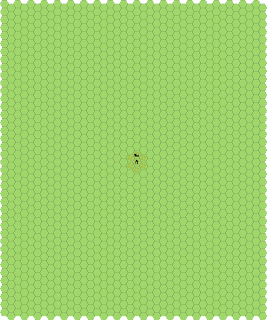 On FaceBook, I only belong to a couple of groups, 5th Edition Dungeons & Dragons (uncensored*) being one of them. I like this group because it tends to be bit unhinged in a good way. Yesterday someone posted they wanted to start a new campaign setting and wanted suggestions. Another member suggested "It starts in a tavern" and I followed up with something like this:

So the starting map is 200 miles by 200 miles, divided into 5 mile hexes. In the center is a town with a tavern, a temple, and a general store, each with 1 or 2 NPC's. One hex to the north are the ruins of the castle of a long dead noble. Then make shit up or roll randomly as they head into other hexes. You will have a new setting in no time that will make at least as much sense as the Forgotten Realms.


A little bit later I posted the map shown here as the starting area. I am thinking, it would be interesting to see how 4 or 5 different Dungeon Masters developed this map over the course of a campaign. The possibilities are endless and of course each one would be tailored not just to the taste of the DM, but the players as well. Perhaps this is the cross roads between great cities. Maybe it is a war torn region full of haunted battle fields. Or this was once an outpost to a great empire now long faded into history and the area is littered with what remains. Or maybe there is a Hell Mouth in the region where demons and devils enter at will.

What I thought was this is the center of a great conflict that is brewing between four factions, this is sort of a neutral zone between the Desert nomads to the west, the Sea Kings to the east, the Dwarven under mountain to the north and the Tropical swamps to the south where Elven shamans practice ancient magic. Of course there are others as well, like the Mother of Dragons who owns the skys and The Red Duke, a mercenary captain with an army and a reputation.
at 8:14 AM