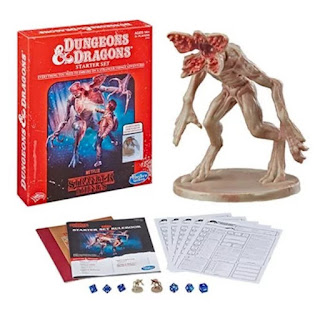 I suppose it had to happen, this spring Hasbro (the parent company to Wizards of the Coast) is releasing a new version of the D&D starter set. This version will be tied into the Netflix original series Stranger Things. The new set includes revised rules for the game, although you will still need either a Players Handbook or the downloadable basic rules to play and some dice. More interestingly, the adventure included is "The Hunt for Thessalhydra", the adventure Mike Wheeler is running at the beginning of the 2nd season and the Player Characters being used by the group in the show. Oddly, the miniatures included with the set are of neither a Thessalhydra or Demogorgon from the first season, but rather the petal faced demon. I get it, TV show tie in, blah blah, I just found it odd is all.

I think this is a great idea for a couple of reasons, first because it will attract new players. Hopefully some fans of the show will decide to check it out and some percentage of those fans will continue to the game long after. Secondly, this shows Hasbro is interested in building a long term strategy for D&D and bring D&D into the mainstream by occasionally printing these tie in products. I would not mind it at all if starter sets became an evergreen product as a gateway to the more complex game.

Who knows, I may even use this to kick off my next campaign, due to start either later this year or early next year. It really depends on the level of the module, I suspect it will be a 1st level module, but judging by the TV show, it may be a mid level adventure for 5th plus level characters, it is hard to say.
at 7:31 AM